First light. Mission orders: Secure a half-moon shaped valley pocket on the battalion's left flank to let the main force conduct its assault due south. I mount my trusty iron warhorse, and off we go.

The first minutes are eventless, except lighting conditions becoming gradually better. I love the smell of desert dust mixed with diesel soot ... it smells like victory. Or, at least the night's preparations culminate with the first mission of the day.

25 minutes past H-hour the objective is clearly in sight. But where is the enemy?

Later the AAR reveals the position of a missile team on the mountain slope. The TOW launcher is loaded, and as the tanks of first platoon come into sight, a white puff of smoke and a bang are the almost imperceptible indicators that the fight is now officially on.

Barely audible over the roar of the 700 hp diesel engine and under the ear protecting headset cap is the characteristic WHIRRRR of a wire guided missile flying by. When you think about it, you can actually hear the guidance wire spooling off which is kinda surreal to contemplate in this situation. The bang of the impact however is sufficient to weak me from the track.

Hard to believe, the missile gunner missed his aim! He will pay dearly for that mistake. 125mm high explosive fragmentary ordnance are being returned to sender.

The missile crew takes cover as gunfire from several tanks pepper their position. To conserve the precious big rounds, I let the gunner pepper the position with coax fire. Fortunately I am close enough for this, about 800m. Shooting uphill, the gunner remembers to aim a bit lower - and indeed, one by one the missile team are served their own medicine.

As quite so often, all of a sudden I'm hit, and have no idea where it came from. Lucky #%&*$# that I am, the explosion flings me out of the commander's hatch. Dust and smoke everywhere, and a painful concussion ... about everywhere, too.

The tank is a write-off. The rest of my crew has not been so lucky, even if the fire suppression system prevented a conflagration of all the ammunition inside.

Time to get myself another ride ... gotta go now.
Posted By: Stratos

Things are getting better and better!!
Posted By: enigma6584

Nice aar Ssnake. I look forward to the next update

. On the downside what are the crewable t-72 group gonna ask for next,lol

Wow! What an improvement! No interior for the T72 I take it, but now that there's some more OPFOR fun...
Posted By: Renius

Originally Posted By: Smithcorp
Wow! What an improvement! No interior for the T72 I take it, but now that there's some more OPFOR fun...

Broody herr, surely this is one of the signs of the endtimes!

Surrounded by evil, low on gas:

We discovered these zombified horde at an early stage of the development.

And here is a spooky, non-undead soldier from the current stage of work:

Happy Halloween, everybody!
Posted By: TankHunter

Nice sagger you got there Nils.
Posted By: Ssnake


BTW how is smoke and artillery strikes looking in this new version? Are there any improvements to their appearance?
Posted By: Ssnake

This is probably best answered by referring you to the picture gallery at SteelBeasts.com, and more videos that we will release through eSim Games' YouTube channel.
One this week, one next, and then probably one or two more.
Posted By: strykerpsg

Thanks for keeping this title updated and continuously evolving into one of my best investments in a game. Do you have an ETA for the patch release, not specifically a date, but at least the projected month?

Originally Posted By: Ssnake
This December.

You are the man Ssnake. Looking forward to it and the perfect season to introduce it as well.

I can only return to you in a few days, but I wanted to tell you a story of our daily patrols that happened to me yesterday. Corporal Mahsud and I were returning from Um'Kituz late in the afternoon, after apprehending a thief and handing him over to the local police. Sheesh, these lazy boys can't even do their basic jobs! Why do they always have to call the military police?

We entered town from the north, near the central well. We gave the driver of this yellow truck a ticket for his parking violation.

The driver was quite agitated, and with strong swearing left the scene. I told Corporal Mahsud to chase him as he was driving recklessly. But we were short on time and had to report back to headquarters, so I took this photo to track the license plate number.

When we arrived at headquarters, Mahsud's cousin Habib thought Mahsud would appreciate a photo of our ride (he did not, and gave it to me, so here you are... but don't tell his cousin that, next time that you meet him. Remember, he can be quite moody).
Looking at the image, I hope we can get rid of the Hesco walls soon, the security situation has overall improved. It is quite tricky to navigate the entrance. But Mahsud is a good driver.

Just as we reported back to Lieutenant Khamir, we heard a loud crash from outside the perimeter. The guard in the tower was on high alert, but soon told us to relax. It was just a traffic accident.

As it happened, the Americans had a drone circling in the air which by sheer luck happened to capture the scene:
It was the reckless truck driver again!!!

We quickly called for an ambulance. But the next clinic is twenty kilometers away, so it took quite a while before the ambulance arrived in town. The sun began to set. Neighbors took photos, which I later confiscated to document the accident for the court proceedings.

Here we can be seen at the arrival of the paramedics:

I also took a photo of Corporal Mahsud before helping the paramedics to evacuate the wounded drivers.

Well, Lt. Khamir was just so kind to remind me in his unique manner that I still have to write the report. I must finish this letter now.
Posted By: Para_Bellum

So we get the Iranian motorbike teams, very cool. Nice with the new civi vehicles also. Semi conventional battles would get quite interesting now. "Shoot the ambulances with irregulars in them, don't shoot the non-combatant ones." "But how do we know which is which?" "It is for them to know and for you to find out."

nice update screens aside, the story was brilliant!

You have no idea what you're missing...

Well, there's often someone willing to share a license for multiplayer games, so you wouldn't have to buy right now. Just ask around at SteelBeasts.com. Downloading the installation files is free, after all.

Wait a minute. You mean there's a T72 that has operable systems? You can shoot missiles with it?

Okay, now I need to get this when it comes out.

The T-72B shoots missiles, we get the T-72M1 to play with which is the export version of the T-72A and doesn't have missiles.
http://www.steelbeasts.com/sbwiki/index.php/T-72M1
Posted By: Wicked

Originally Posted By: Cat
Wait a minute. You mean there's a T72 that has operable systems? You can shoot missiles with it?

Okay, now I need to get this when it comes out.

...our 2 squads where send, to find out what the ENY was up to.
We mounted our trusty Fuchs APC. 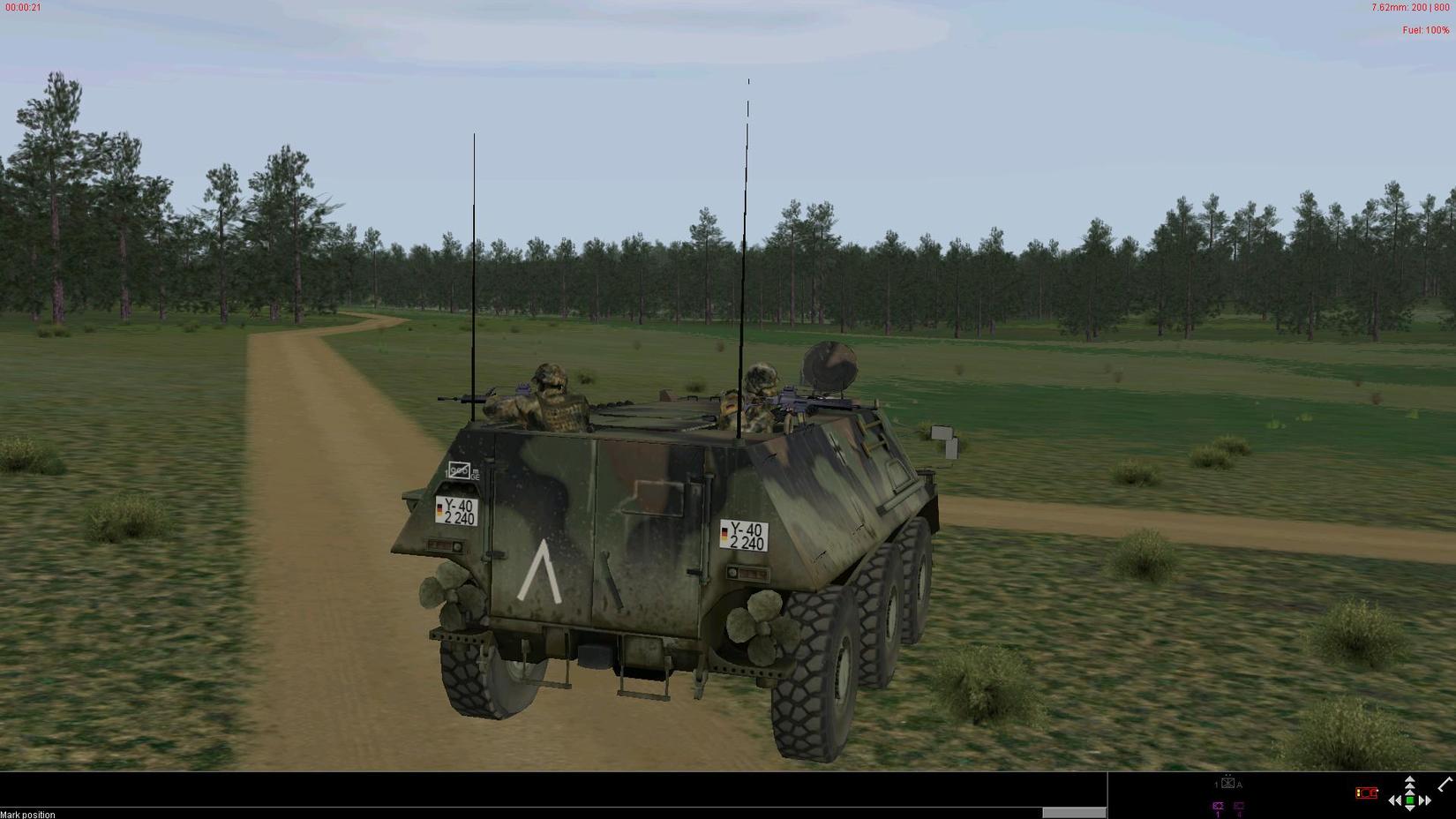 Our patrol was meant to move along the blue line 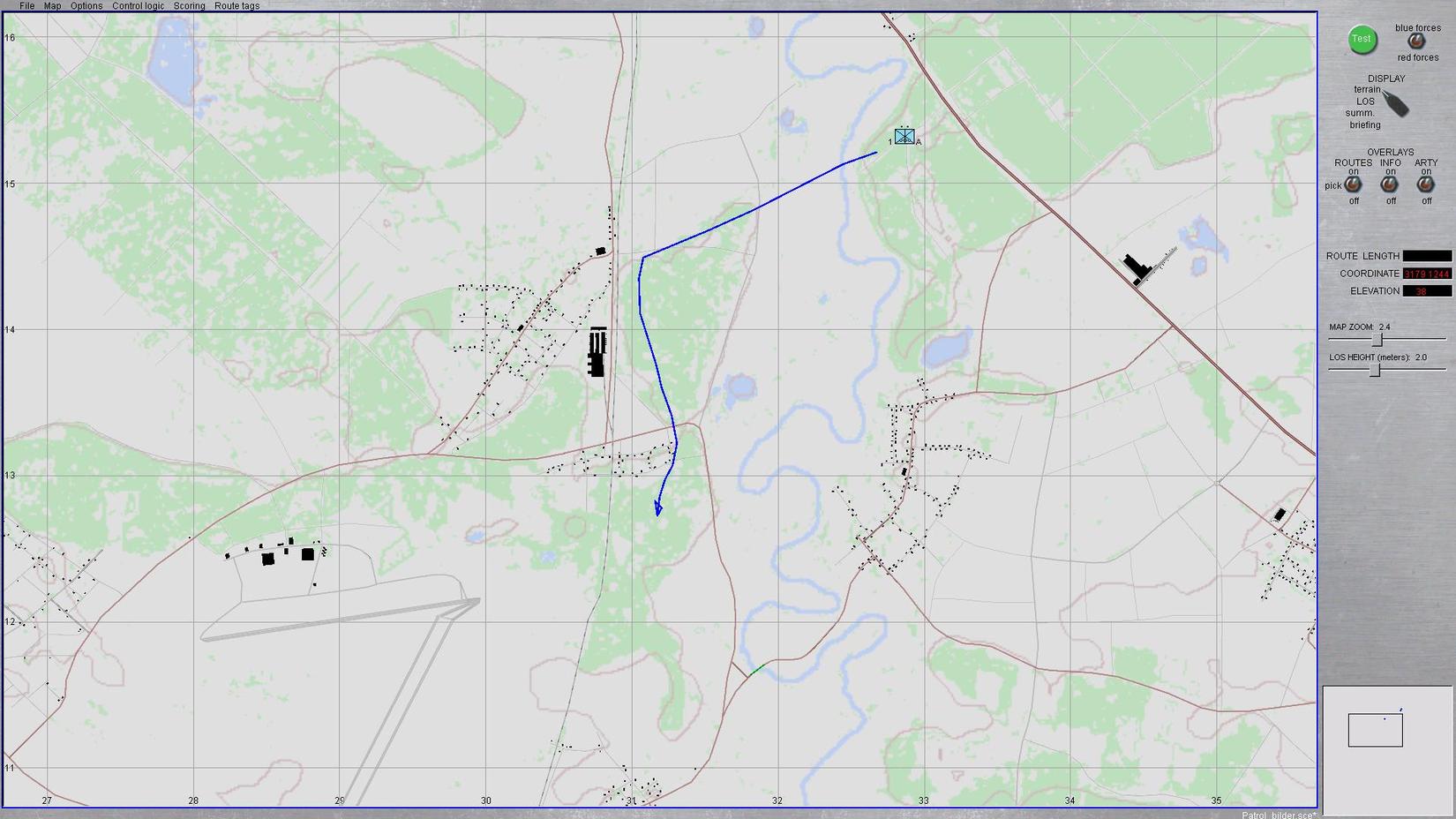 So the amphibious cabability of the Fuchs came in quiete handy: 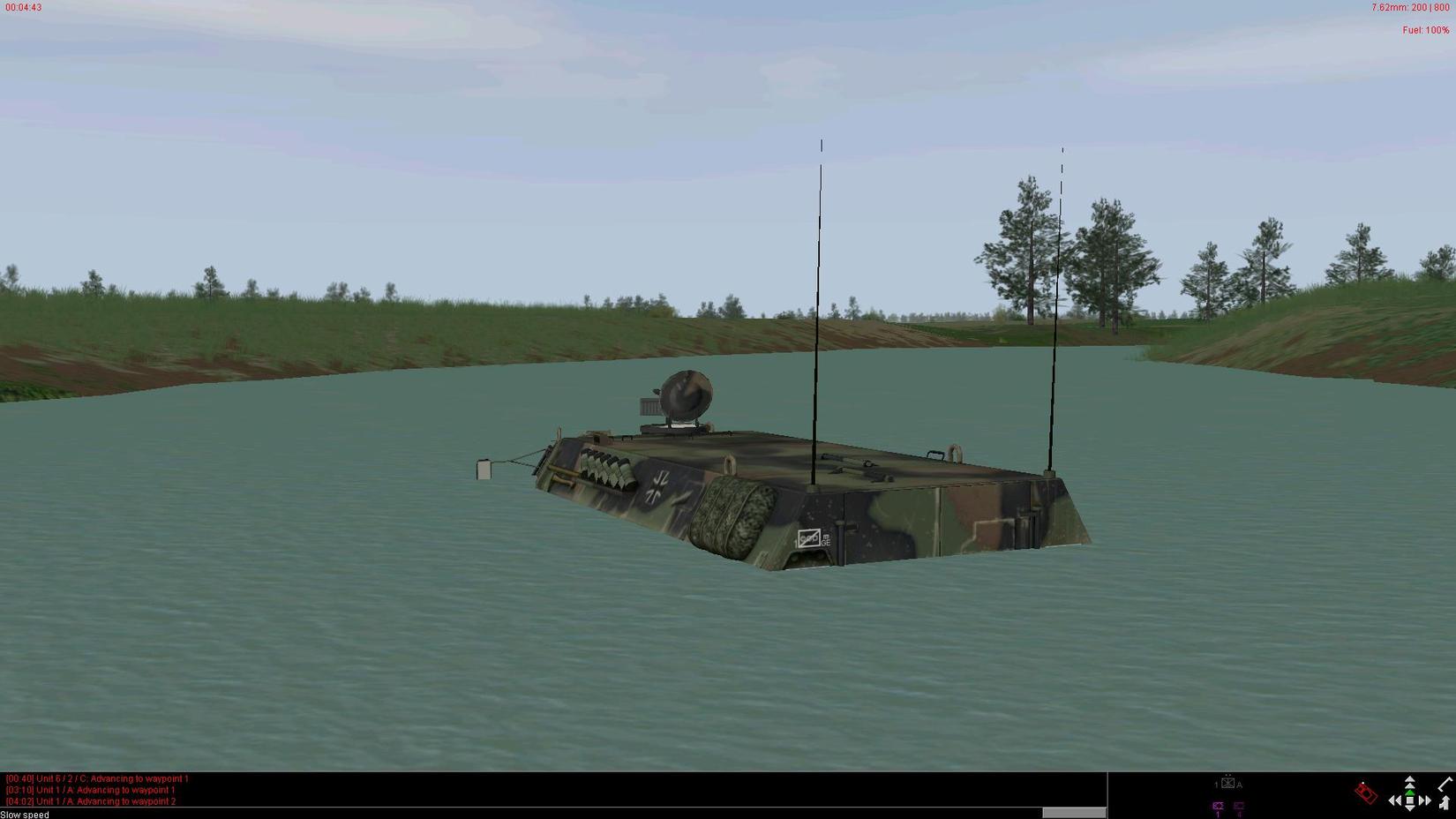 Meanwhile the guys from the heavy company provided overwatch: 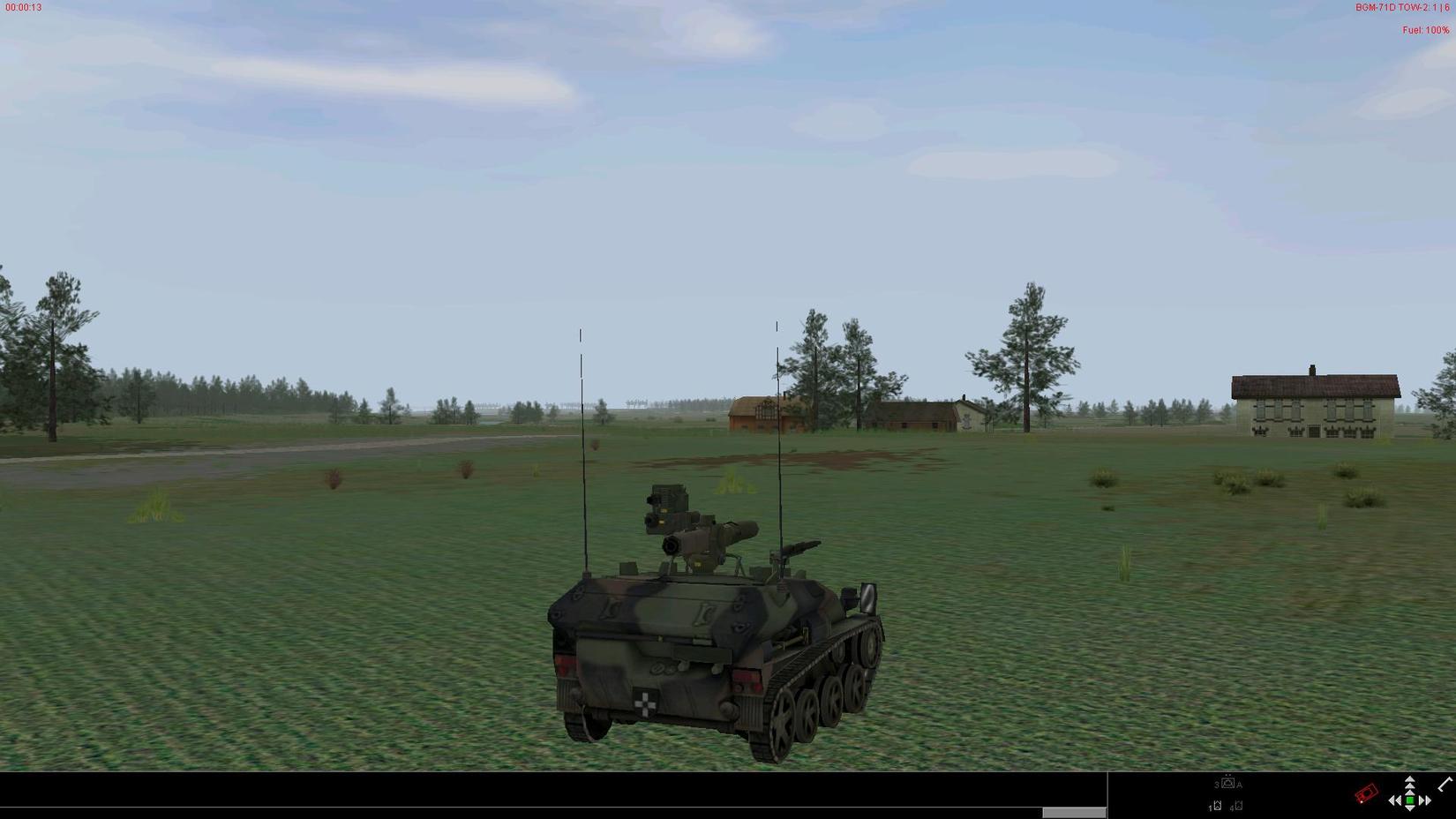 We made it to the other side. Then at a listening-stop we hear engines...TANKS!!
Time to unload the Milan and go for a hunt. 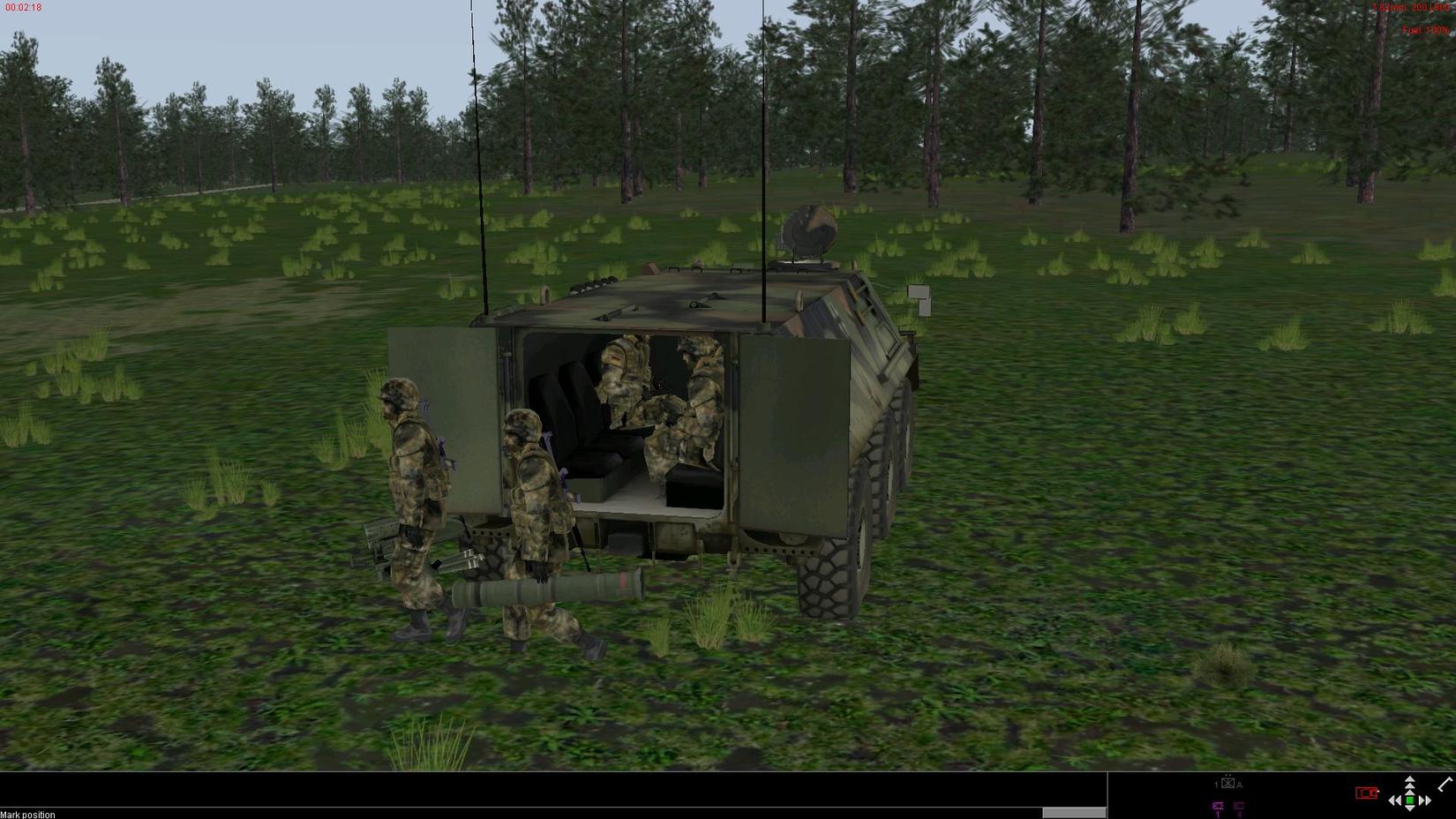 And there they are, 2 T-72 crossing the river while a 3rd provided overwatch probably a reccon party. 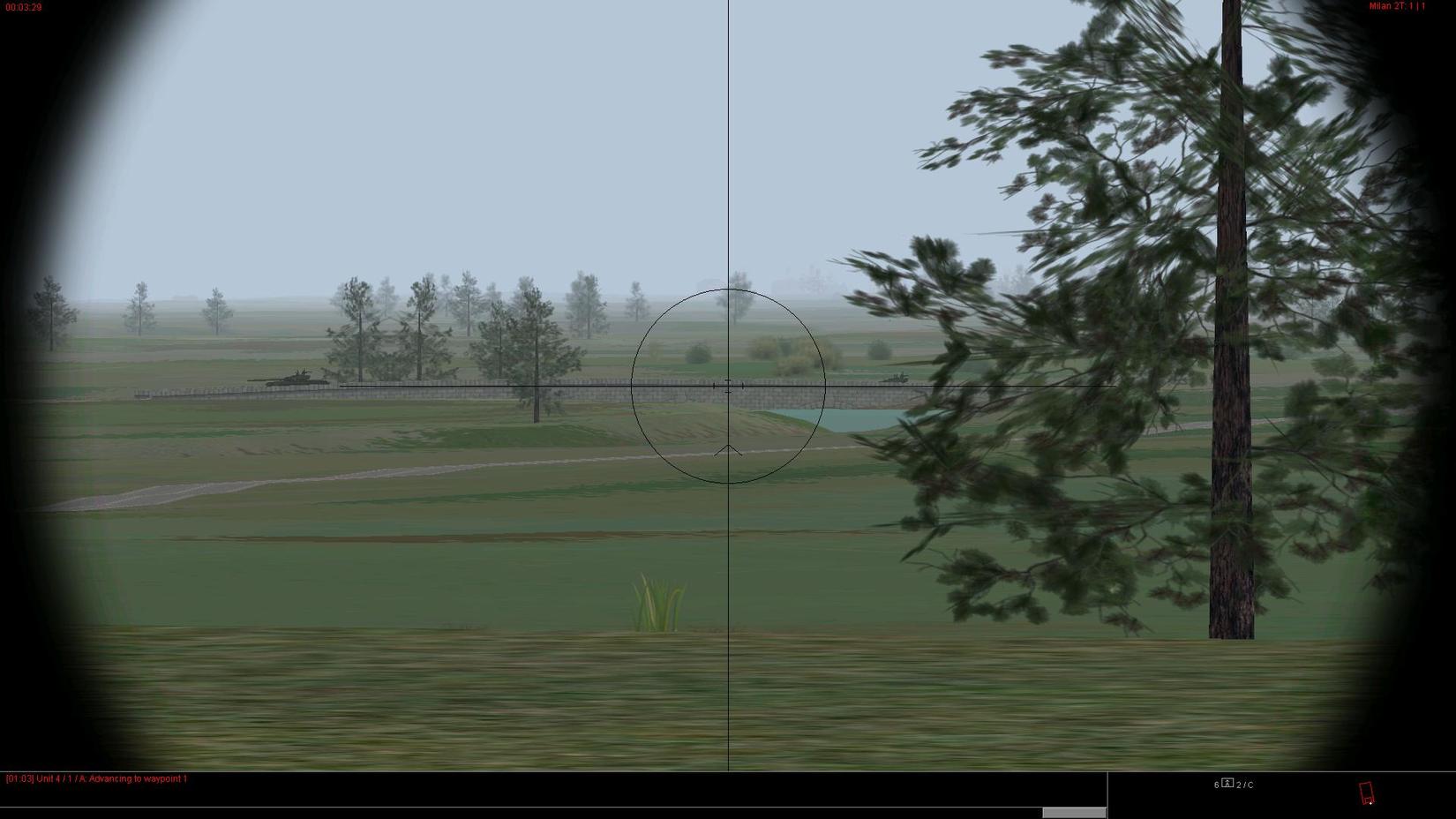 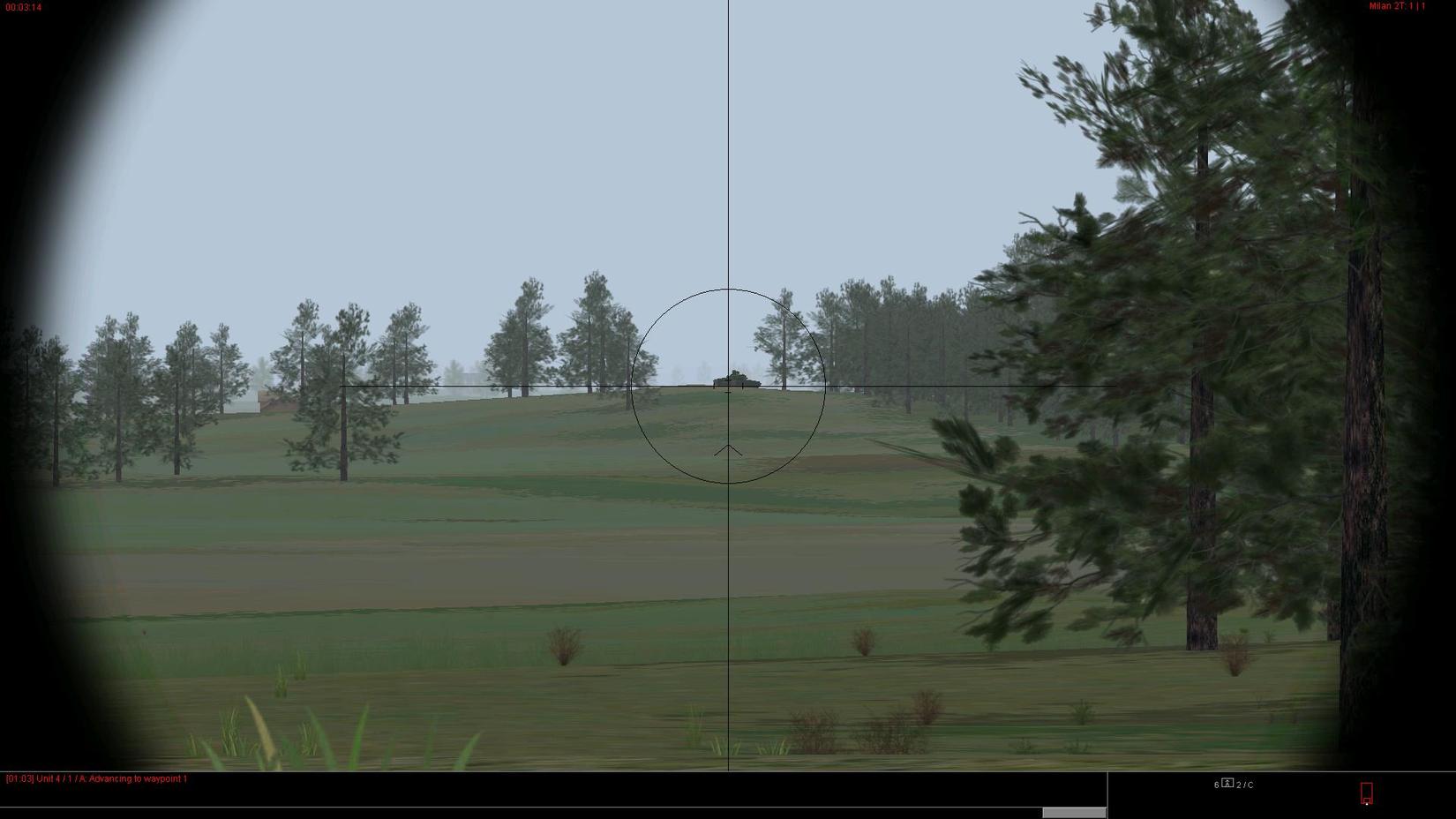 As the "overwatcher" tries to follows the rest of his platoon, we decide that he's gonna get it as his buddys can't see our FP: 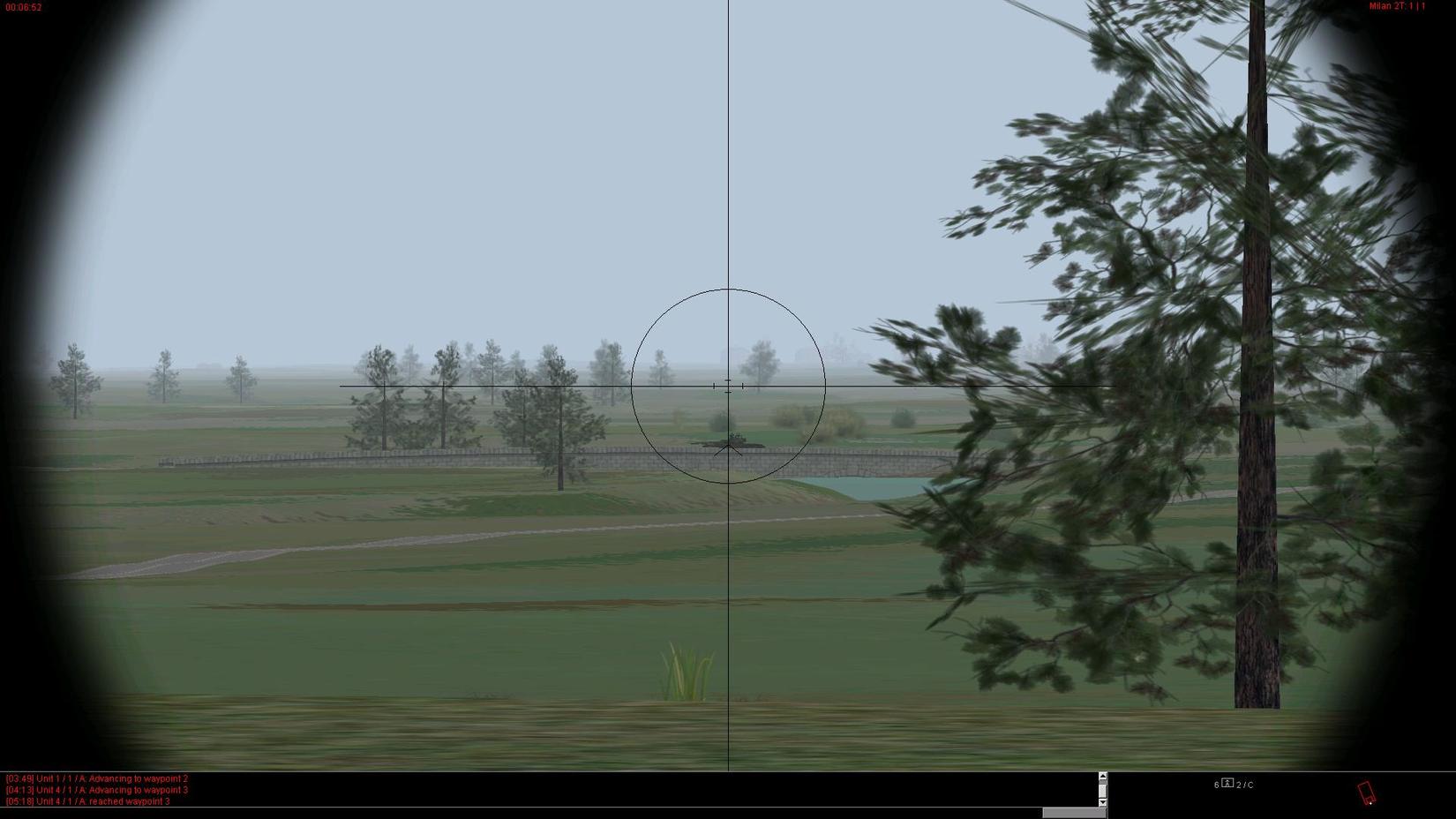 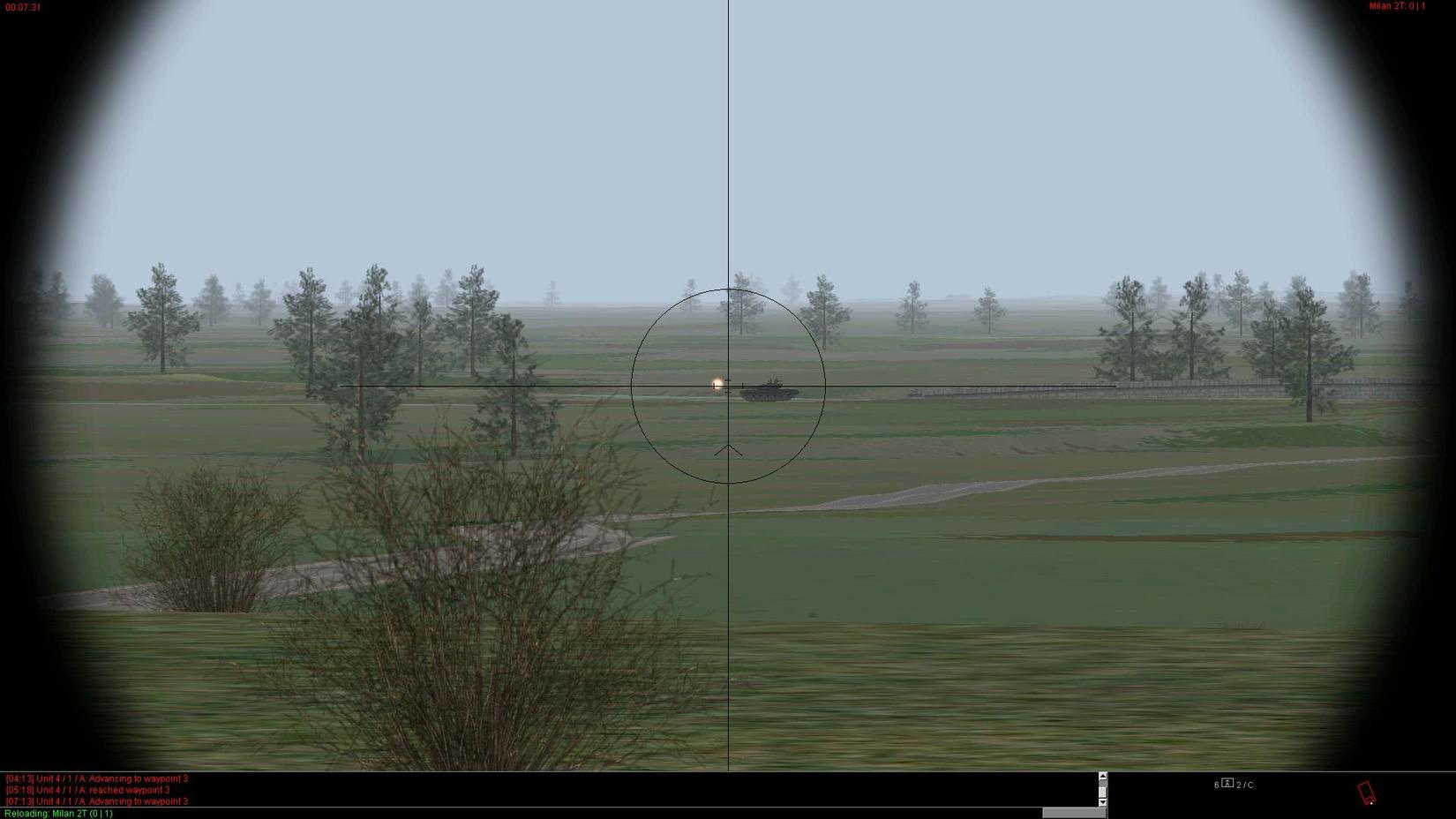 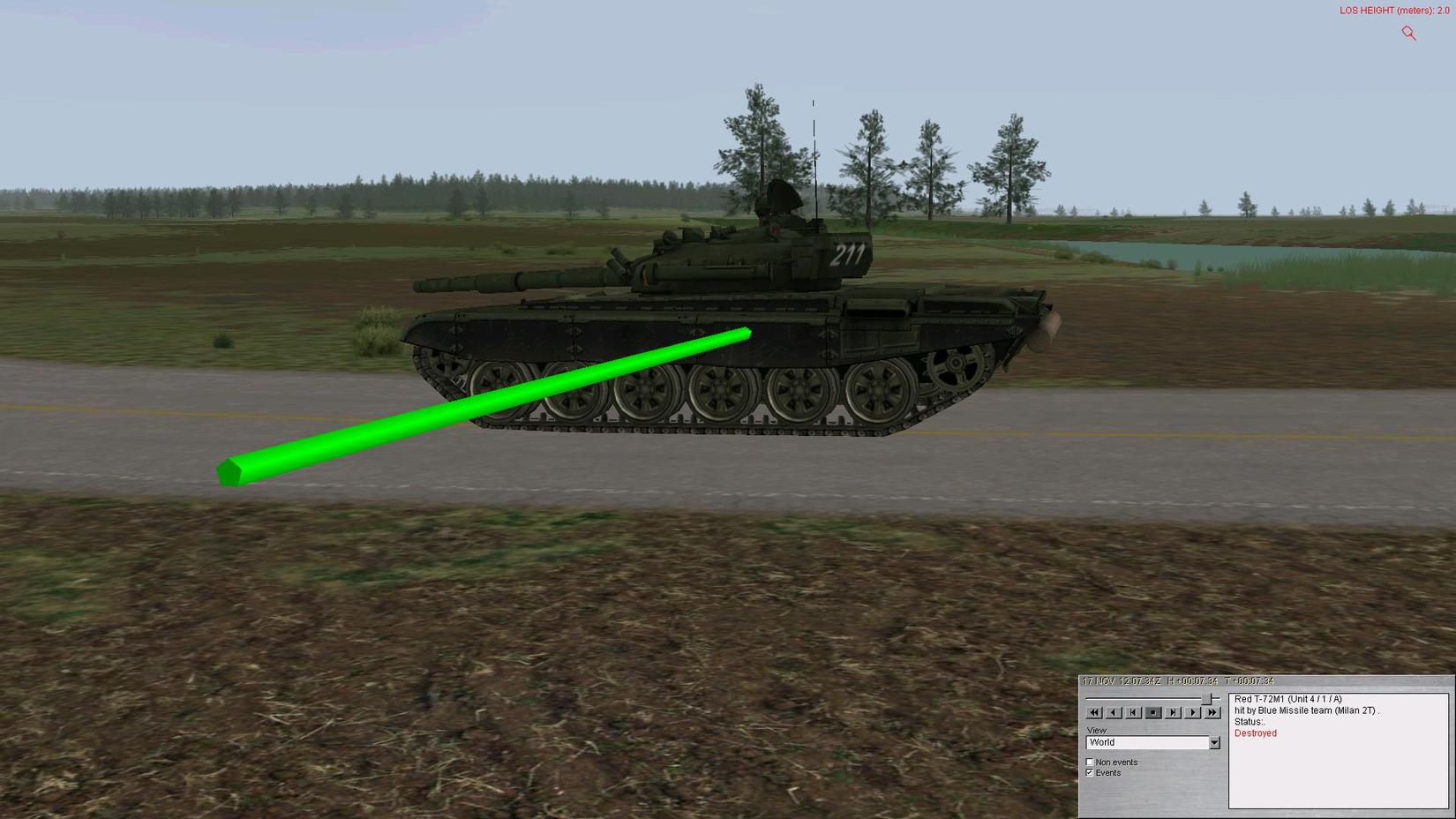 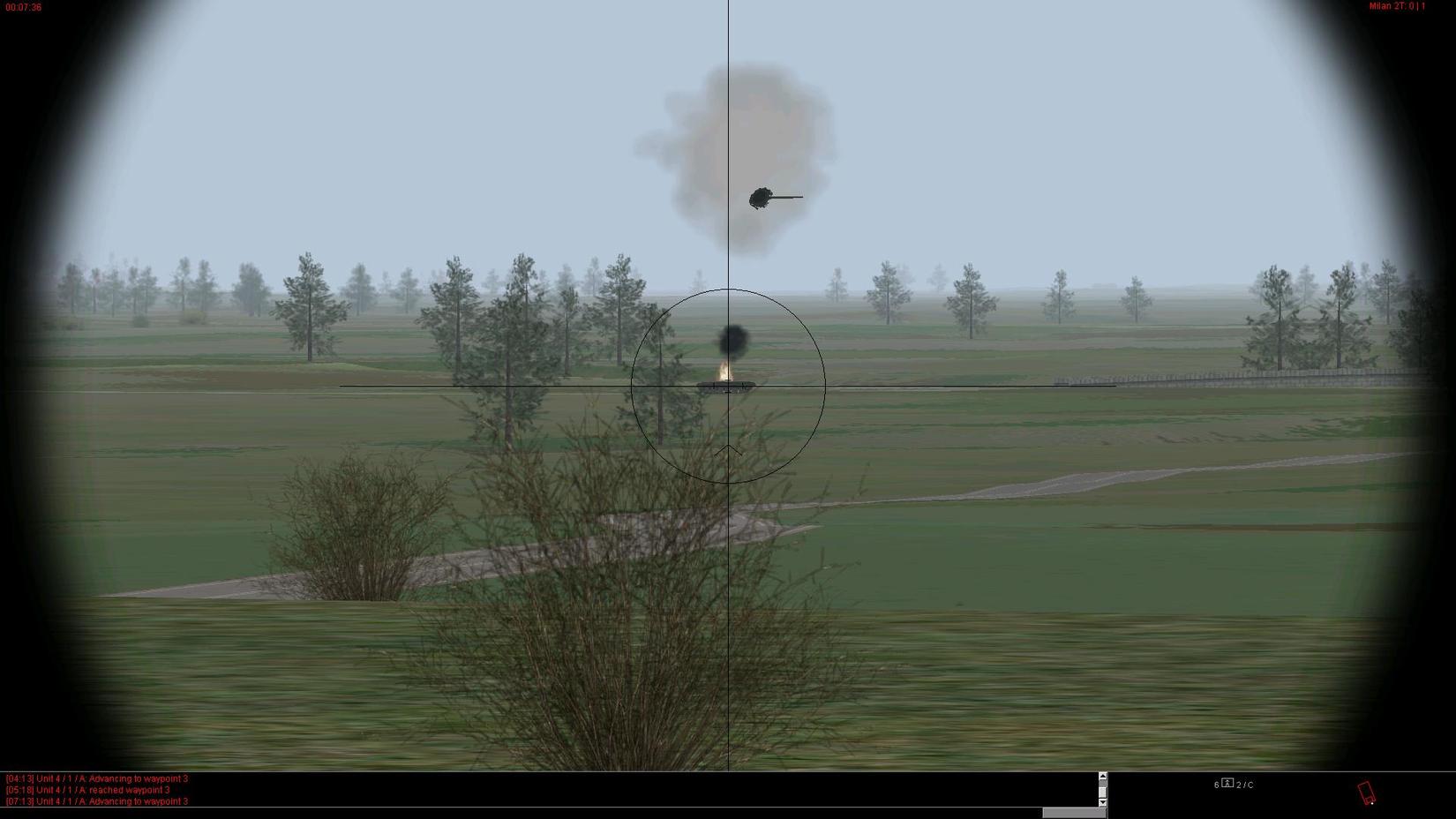 While the rest of the reccon party legged it.

Thanks for sharing those sshots Ronin