Quote:
Sorry all for the lack of updates, but in the tradition of being honest to the community, here's in attachment a screenshot of the Harrier GR3 in-game.
It has some adjusts to do like the MDC on top of canopy plexiglass, and personally I think the weathering in wings texture is quite overdone compared to fuselage. The external fuel tank is looking too bland and the red color in the red marks and the RAF roundel is looking way too saturated. But all those are minor adjusts which will be done easily as a matter of content polishing until release.

There are more pressing issues to do on queue like: we're busy doing the RWR and the map display in Harrier's cockpit, it's going well, although it's a very programming-oriented task.

Also, we are not quite happy with the wingtip contrails (they're square-looking and segmented), and there is nothing that artists can do, it's pure programming task as well. They must be improved. Anyway, last week I recorded a lot of raw footage in-game of Jet Thunder, which goes in a DVD that Aerosoft distributes every year with the releases, it featured the in-game Harrier GR3 model and looked pretty good.

Argentinean fans, not to worry, the Pucará will look as good, if not better, than the Harrier, and the cockpit is being remodeled and painted by the ace Aerosoft Artist Stefan Hoffmann. It is the last bit of content to close the data package for first release, and it will be amazing.

Summing up, in the honest way to tell things to the forum followers, things that we are not satisfied with:
- ground physics: not just the behavior, but the lack of actual feedback (spinning wheels, shocks absorvers, etc - extensive programming task here, completely unrelated to animations done in 3DS Max like done for FSX planes)
- particles, effects and contrails: still unnappealing compared to other sims mentioned here, also completely depending on programming input
- A.I. aircraft doing unexpected and undesired things, like raising landing gear on carrier's deck when receiving authorization to take off.
- there is no FM Trim function yet
- view system also received a fair share of criticism from closed testers

Things we're happy with:
- game looks pretty good and runs very well specially when looking at the very low system specs (textures are 2048x2048, airplane models such as the Harrier GR3 below are 50k polygons, but the game runs at a solid 60 fps in my medium spec PC at 2.66GHz, 4GB RAM and GeForce 9600 512MB, it's prolly running at much more than that but is subject to LCD monitor refresh rate
- flight model feels good and is challenging enough, although our pilot advisor Sean said the roll needs tweaking
- lots and lots of simulation features (RWR identifying radar bands/frequencies, infantry people marching and firing at each other with Howitzer artillery covering them etc etc)
- lots and lots of content assets already delivered and in-game (mostly already shown here in preview forums)

Also, unlike most other game projects in the game industry, which are always under the risk of having the "plug pulled out of the wall", as Mathijs already stated that it's sort of a labor of love, so don't worry, there is not too much of a 'plug' to pull here. We just can't afford the project to "lose momentum", again in Mathijs words, so here I am partially addressing this concern.

So basically, they're not satisfied enough for a release so they're tuning it till they're happy. I'd prefer them do it this way, however I can't say that them keeping in the dark after failing a designated release date was the best strategy. Nice to see they're still hard at work. Thanks for the update. When I read that areosoft was taking over I knew there would be a delay. But that delay would result in a great Sim.Can hardly wait to fly that bird.
Posted By: RSColonel_131st

Thanks for the update too.
Posted By: Tbag

Thanks for posting PP!
Posted By: HarryR

As greatfull i am for the update, it sounds like this game is at last 6 months away from release.
I seriously doubt a 2011 release!

More pictures of the Harrier GR3 (in-game) showing other loadouts used in the 1982 conflict: 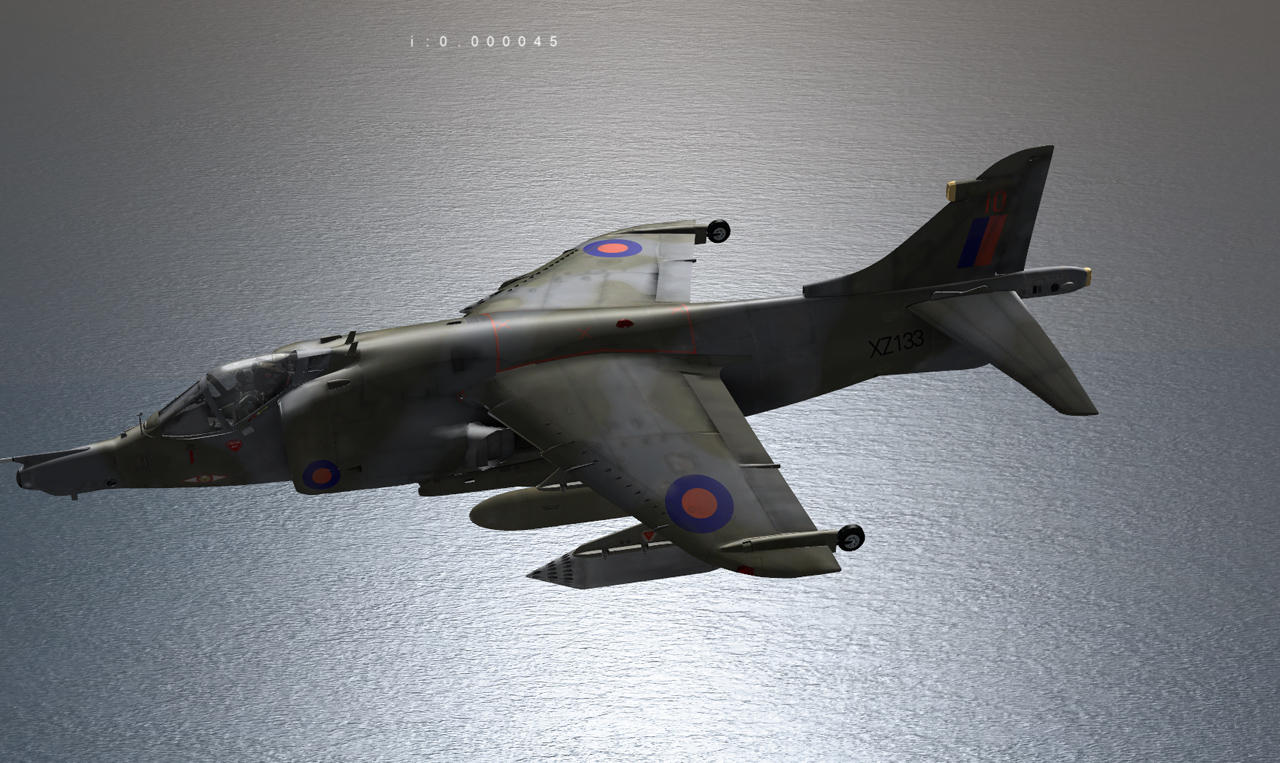 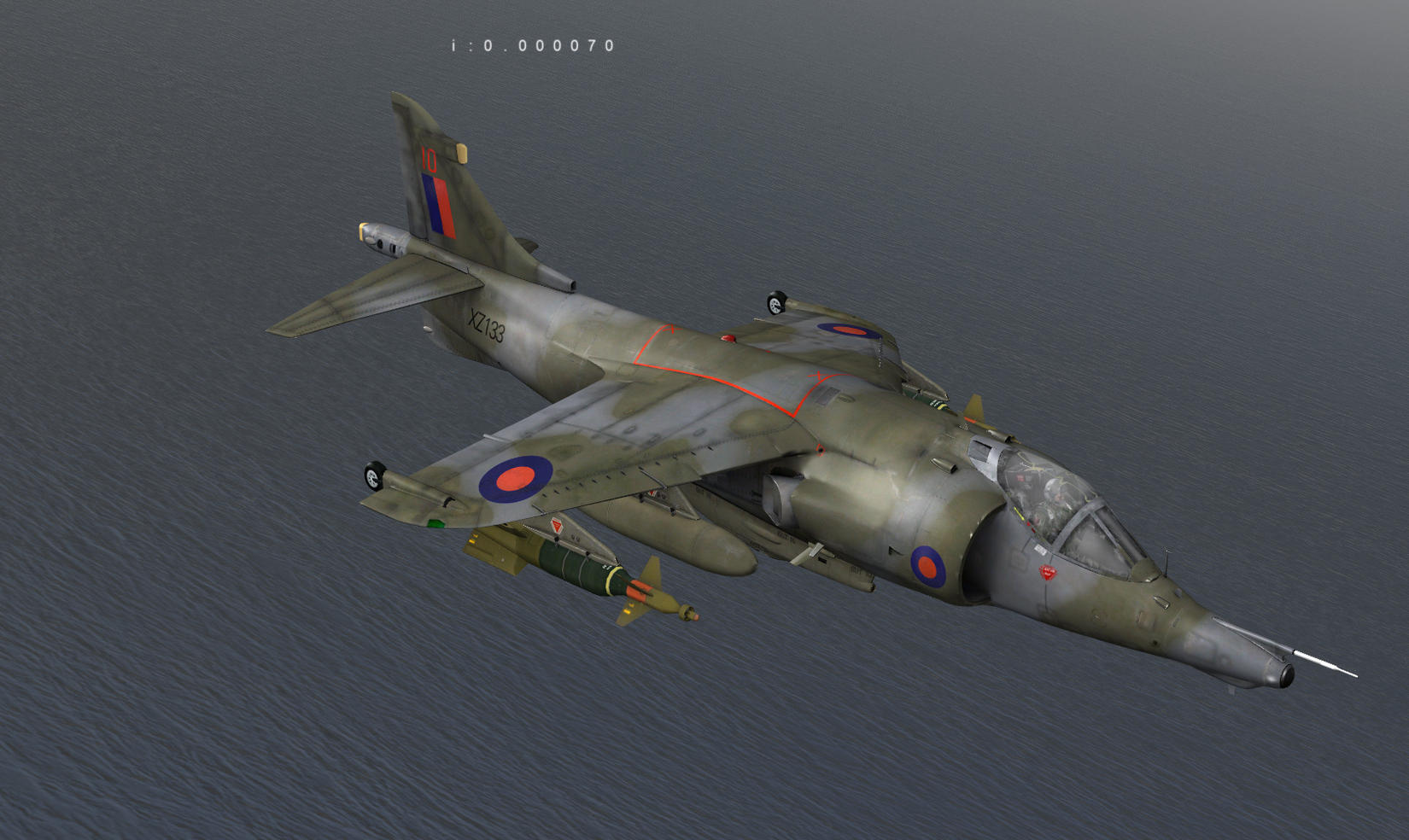 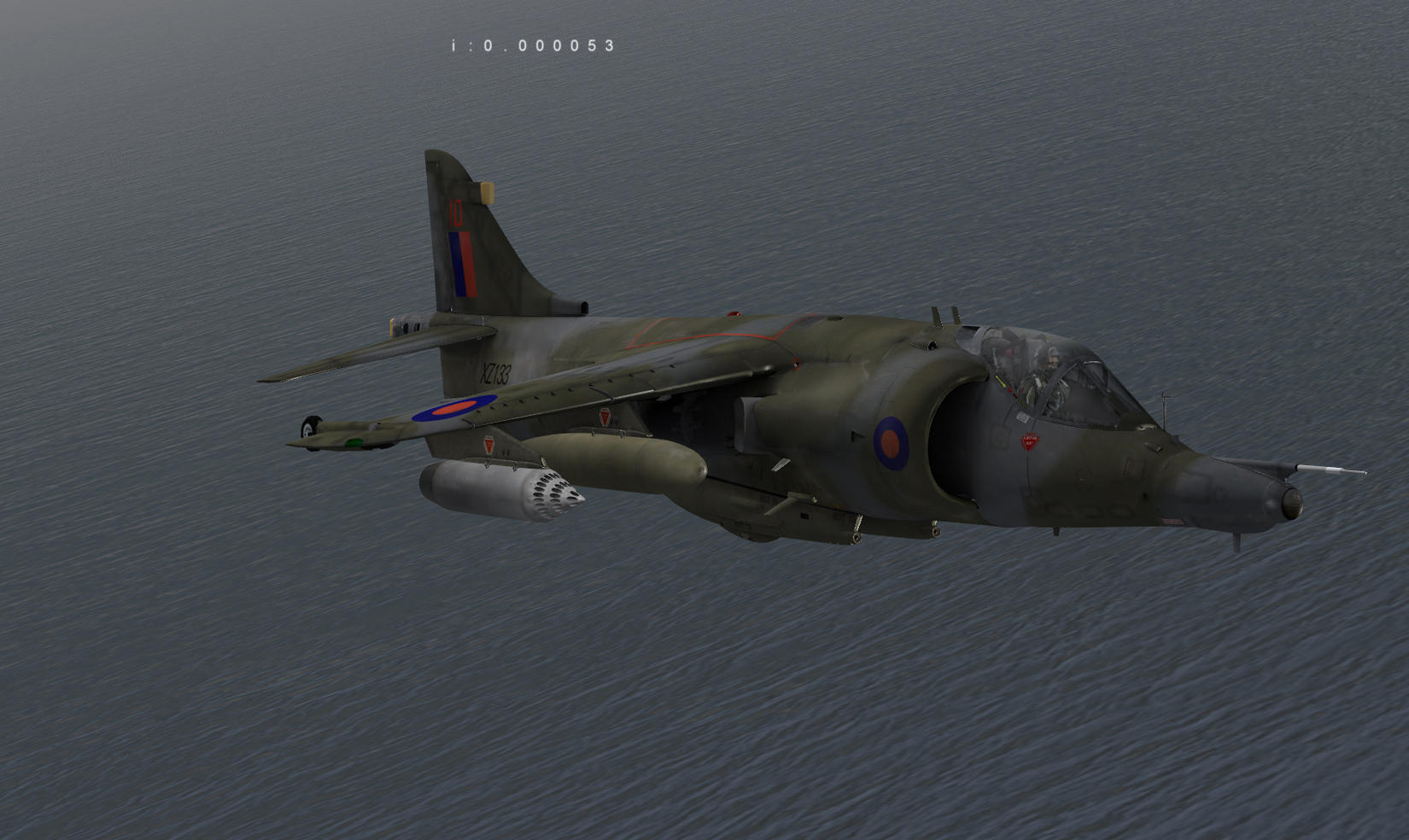 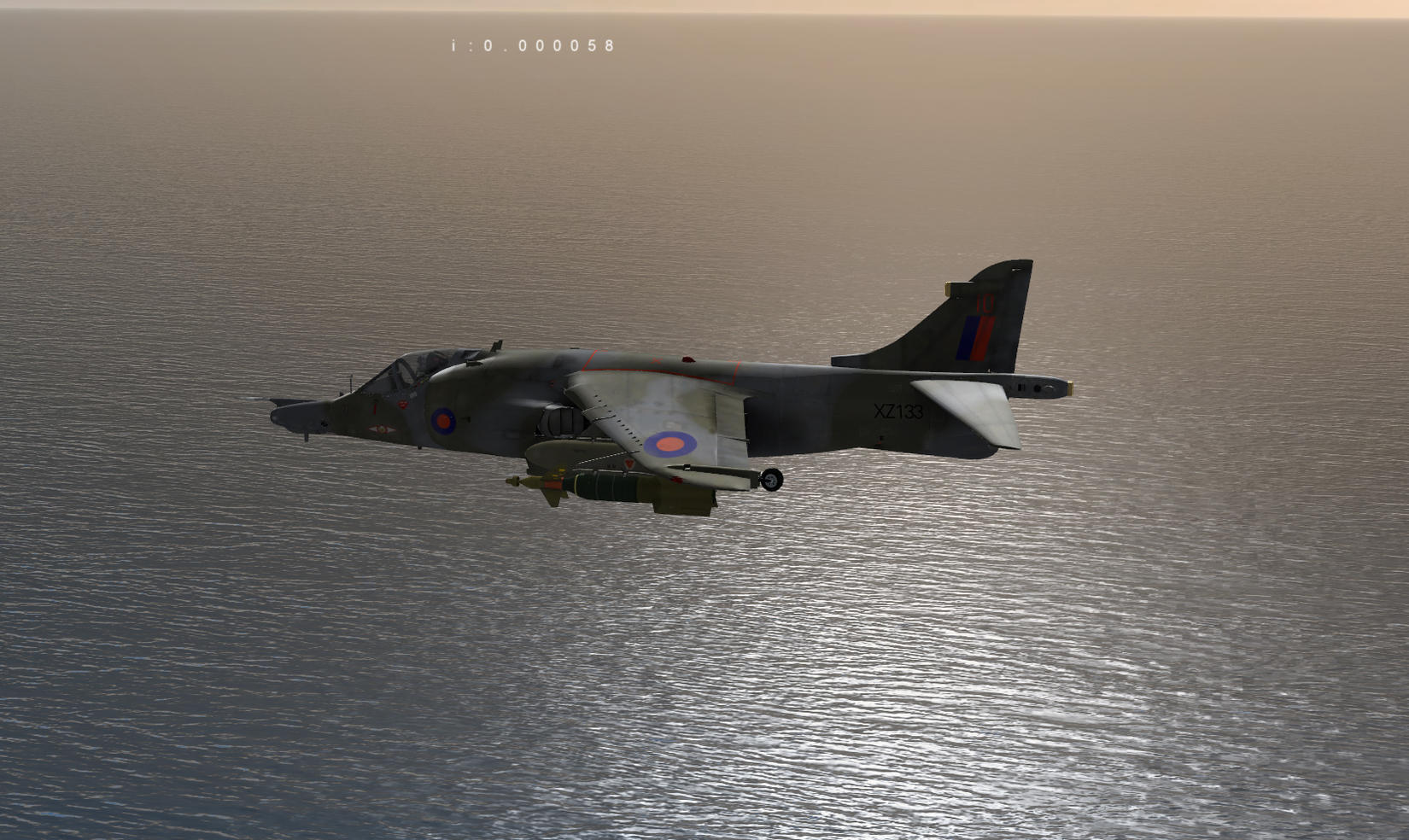 Good news is that the ground physics issue (suspension, spinning wheels etc) that previously we weren't happy with, was addressed this last week, finalizing yesterday (Sunday). It was a feature (or a lack of, in fact!) that received the most negative criticism by our closed testers, so much that something had to be done in this regard.

We're starting to look up-to-date too regarding enviroment and object lighting, as shown by the screenshots above.
Posted By: HitchHikingFlatlander

Thanks for the update Dante, good luck with rolling this out the door.
Posted By: AggressorBLUE

interesting that there is no trim system yet. I'm assuming the RL harrier has a trim system though, correct? As opposed to fly by wire or auto trim? I know they need to add it in, I'm just surprised that it's added this late in development.
Posted By: HogDriver

Thanks for the update. Take your time. Would hate to see the game released (overly) buggy.
Posted By: PishPosh

Originally Posted By: HogDriver
Thanks for the update. Take your time. Would hate to see the game released (overly) buggy.

I'd like to echo this. This is looking like a great sim and while some people may need their instant harrier fix, many people who will stick with the sim over time appreciate the minute details that require the hard work you guys are putting into it. Those pictures look amazingly good and thanks for updating the update

Looks like the sim is taking shape nicely. Those GR3 shots look better than any I've seen before which is a good sign as to how things are progressing. Looking forward to it - but please do make sure MP works...I won't be able to convince my squad to buy it if it isn't.
Posted By: lbuchele

Thanks for the update Dante.
IMHO updates aren't mandatory but you can't deny that they are a great way to maintain the interest high,specially if it's still your plan to release this year.
Couple screenshots every one or two weeks maybe?
Posted By: BigC208

Been watching this one for a long time. Sort of glad that it took this long to get out of the door. Computer technology is now at a point where it can really make this sim shine.
Falklands/Malvinas war is the first war I really remember happening. Right in the middle of my compulsary military service. We would watch the news at night on our base and be
in awe as we watched the low level Argentine attacks on Port Stanley. Can't wait to play out those scenario's. Keep it coming.
Posted By: joey45

That Harrier is an absolutely beautiful model. Hey, ya know, if you're falling behind on the release date, you could always catch up by releasing the first two together. That would get you back on track!
Posted By: coreyhkh

Yea a lot of pictures but where is the final product!
I want to start download soon!
Posted By: HitchHikingFlatlander

Good things are worth waiting for!
Posted By: Bumfluff

Can't wait for this and to get my HOTAS on that Harrier. Can we not even pre-order yet?
Posted By: Twopots

Really looking forward to this title. Remember the Tawara anyone?
Posted By: Chucky

Originally Posted By: MaceUK33
Can't wait for this and to get my HOTAS on that Harrier. Can we not even pre-order yet?

I wish these guys just said anything a little more often. Even if it was just "still making progress" or "nothing to comment on at the moment". But I also know these guys are a small outfit and likely hard at work so were back to "patience is a motha-!@*&^% of a virtue to aquire" lol.
Posted By: Lewis-A2A

Very much looking forward to this
Posted By: Dante-JT

Hopefully you guys saw the new IA-58 Pucara cockpit which is detailed down to the minimal details, anyway here it is: 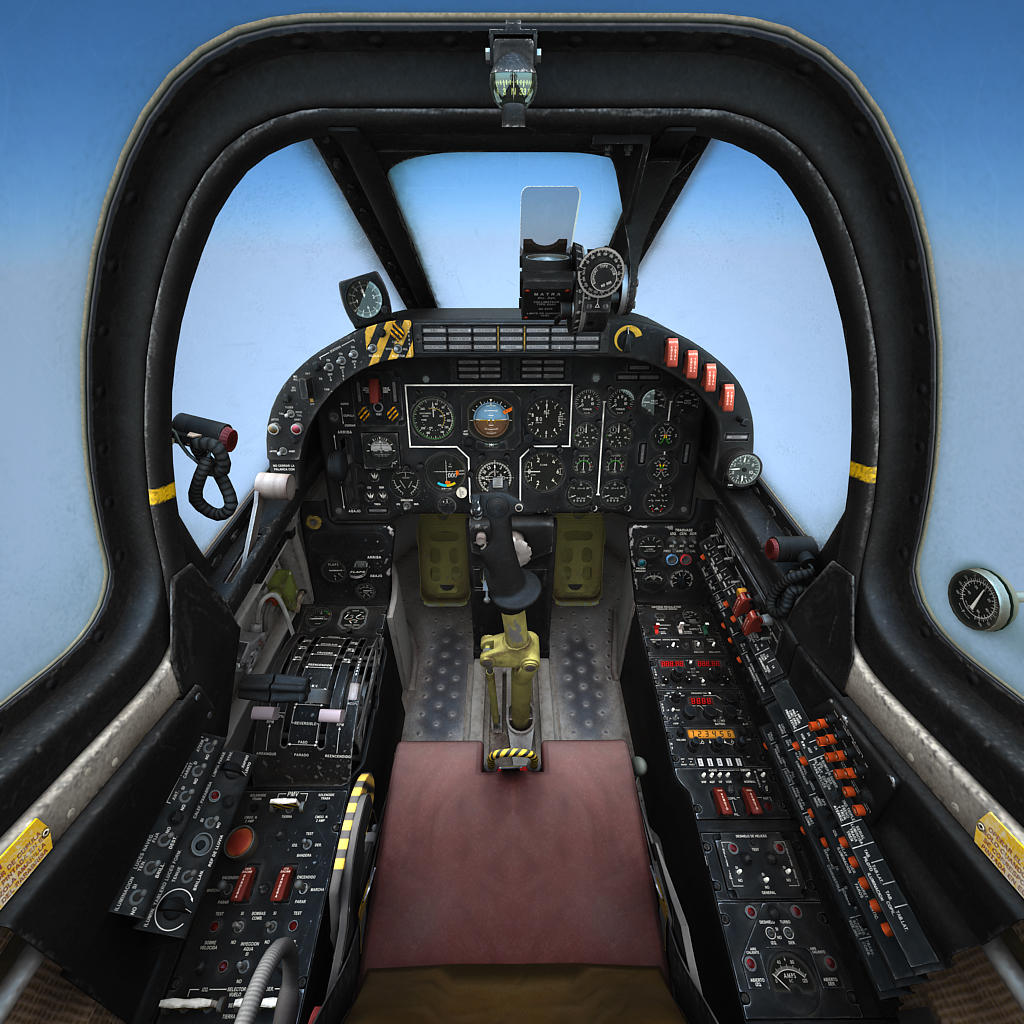 Stop teasing us Dante.Give us a release date and put me out of my misery.
Posted By: HitchHikingFlatlander

Damn nice stuff Dante! Please forgive me for this but it's certainly

Delicious looking cockpit. Dante, for a fellow polygon wrangler like myself, you think you could enlighten me as to tri count and number and size of texture maps?
Posted By: Moses

dude those pics give me wood
Posted By: tagTaken2

I wouldn't get to excited, based on this-

I doubt we'll see it inside a year.
Posted By: Aladar

I'm excited to see them taking their time. Rather get a proper sim, than another COD.
Posted By: Chucky

Originally Posted By: Aladar
I'm excited to see them taking their time. Rather get a proper sim, than another COD.

I can wait I barely have time for the sims I own ATM, had A10C for months without a real opportunity to learn and get familiar with .
Posted By: Avimimus

I'm very much looking forward to the DVD release of this.

If it has rocket dispersion and other ground attack details + infantry or other complex ground targets for COIN, I will be deeply devoted to this sim. No one has done COIN well (I really enjoyed replacing the tanks with infantry in SFP1 though - if only it had rocket dispersion and proper penetration values for the small guns!)
Posted By: Dante-JT

Originally Posted By: Aladar
Delicious looking cockpit. Dante, for a fellow polygon wrangler like myself, you think you could enlighten me as to tri count and number and size of texture maps?

...and 3x 2048 texture maps, and other smaller ones for warning lights, cockpit glass and instrument faces. After the positive experience with the new Harrier GR3 cockpit (about 57k polys, 5 times more polys that the older cockpits we had), we've set the budget for upcoming cockpits (after the GR3) at about 100k, and the frame rate is still very good/pratically unchanged in mid-range machines like mine (GeForce 9600GT, Intel Q8400 @2.66GHz, 4GB RAM).

Avimimus: we're listening to your COIN requests, and we'll try to be very open to feedback during beta and after 1st release (to address the feedback in after release updates).
Posted By: AD

If I may ask, what is the object count? We've found object count to be a much bigger overhead than pure poly counts. It looks beautiful btw.

If I may ask, what is the object count? We've found object count to be a much bigger overhead than pure poly counts. It looks beautiful btw.

110 so far, but it's going to increse substantially when more switches are separated to move on click!

Since your posted the system specs of your machine, can you at least tell us if your sim will take be built for multi-core uP's? Take advantage of more than 2gig of memory? Threaded?

I'm being a critic, but I'm also a longtime fan of JT too.
Just want to know.

thanks
Posted By: Lieuwe

Wow some really good looking screenshots! What are your plans for a campaign?

-Will it be linear or dynamic, will you be able to "change history" is it were?
-Will damage to objects carry over to the next mission?
-Will the missions be coop playable?
-Will you be able to fly the Etendard? To me it has always been the most beautifull machine ever built in France

Anytime you have chance to update some screens and videos would be great. Believing is great and all but "seeing and believing" now that's something all by itself. I can be patient though.....
© 2021 SimHQ Forums