Might as well do a separate thread for my little FM poll gents...I will probably have more free time in the fall to comb over a few more FMs for WOFFue that I've been planning to get to but kept postponing. Poll follows below and will remain up for about a month. Fun times ahead with this great sim.

Yes, the FM tweaks pack includes FM tweaks per all 11 folders for each individual aircraft tweaked (squad, quick combat, main, etc.) - so, technically, the changes are also valid for the AI-flown planes too since all the aircraft folders for each type I work on are tweaked/duplicated (the xfm files).

I've noticed this myself when going up, in a Nieup, against the tweaked Alb. D.II variant with 180 hp, for example; the AI is more capable in it than in the stock (160 hp) Alb. D.II (better climb, etc.). Another good example is the Vickers-armed Nieup.23, tweaked to become a 23bis (125hp, better top speed, climb, etc.) - it becomes a more capable opponent, and is also more capable when player-flown. The tweaks are fairly subtle but realistic - I've tried to carry over much of the "feel" of my FM tweaks for FE2 - so it doesn't break the AI or do anything silly with it.

For a fun test, load up my tweak for the 150hp Fokk. Dr. I and then go up against it for a world of hurt - I can barely knock that monster down but I have to load up something equally potent such as the engined-up Nieup 25/27 tweak I've included (165hp) with my previous FM packs, or the 220hp rare Spad 7 so I can get away from it in a hurry if necessary.

How the AI fly the tweaked types also depends on their skill level: novices and regulars might not do as well as seasoned pilots and aces. My tweaks tend to make the types a bit more slippery when landing (more float, yaw, etc.) - and I've increased fuel consumption rate on them a bit, by about 10-15%, depending on engine type.

The main PIA to me is the ability of AI to dive without any speed limitations. You will never see the AI to break wings due to overspeed or overG. If you find how to solve this unbalance, you are hot nominee to honored place in WOFF's hall of fame.
Posted By: VonS

Thank you for that info. - I will definitely look into it to see if anything is possible in the xfm files, in terms of putting limits on what the AI can do. In FE2 we discovered that implementing Max G limits across wing and tail sections did the trick for putting the AI in a more limited position while flying too. Will see if I can do something similar in WOFFue...will study the xfm files more thoroughly in a month or two.

Thx, VonS. Just from my own observation it seems that cfs3 does not check speed limits of AI planes at all. I have made several tests with overspeed limits set to unusually low values, but AI did not mind and dived as usually

Here is the main problem that has existed since WOFF phase one. Many of the aircraft in WOFF UE (player controlled and AI) can dive at unrealistic speeds. While the speed is slower in WOFF UE than it was before, it is still too high. The human player, however, cannot risk diving too fast because of the risk of overspeed damage. Unfortunately, as JJJ has pointed out, AI controlled aircraft are not affected by overspeed damage.

In WOFF phase three, I discovered a way to work around this (I have dabbled in WOFF FM's myself). At that time, WOFF still relied a lot on variables supplied by CFS3. In particular, one could edit the CFS3 air.cfg file to increase the parasitic drag factor which controlled the maximum dive speed (as well as cruise speed and maximum level speed to a slightly lesser effect because parasitic drag increases in a dive) of each aircraft in the sim, both human and AI controlled. Furthermore, by adjusting other values in the air.cfg file, you could adjust maximum G limits and overspeed limits. Unfortunately, even then, the AI was not impacted by these limitations. At least with my modifications, the AI could not dive any faster than the human controlled aircraft, except when the human player was flying a plane with wings sensitive to overspeed damage such as the Alb's.

With WOFF phase 4 (I think that is the correct phase, not sure anymore) OBD decided eliminate its reliance on the CFS3 engine in many respects having to do with the FM, including doing away with reliance on input from the air.cfg file. I'm sure that opened up some new avenues for OBD to pursue in terms of the FM, but unfortunately, third parties can no longer mod the drag values directly.

My hope is that OBD may one day decide to revisit the maximum dive speed for both human and AI controlled aircraft and lower them across the board. At least then when the AI dives away from you because they are not affected by overspeed damage, at least they will dive away from you a little slower!
Posted By: VonS

Thank you for the detailed info., was not aware of the air.cfg files since that is before the time I picked up WOFFue. When I look over the xfm files carefully, I will try to experiment with a few variants to see if any extra variables can be included in them. For the FM tweaks I've done already, I've increased the overload G limits and max dive speeds by about 10-15%, which should result in more competitive dogfights with the more perfect AI - but I will also consider the opposite approach, if it is possible, of creating a cap on dive speeds/G limits for the AI. Thanks all for the detailed comments. Stimulating and challenging times ahead with the xfm files - also pleased to see that the latest poll results have 63% choosing that the Spad 13 be subdivided into the different hp variants, runners up being the tweaks for the Nieup. 16 and 11.

Decided to use this thread instead of starting a new post - pleased to report that Ver. 4.0 of the FM update pack has been uploaded to CombatAce (might take a couple of days for it to be approved). The link is:

Included in Ver. 4.0 is an Oeffag variant of the Albatros D.III (which replaces the standard mid-series Albatros D.III), an improved Albatros D.Va 200hp, three subvariants of the SPAD 13 (200/220/235hp), and tweaked Nieuports 10, 11, and 16. Have decided not to bother with a rare engined-up version of the Fokk. D.VI since that is largely a what-if aircraft. FMs were tested in ver. 4.18 of WOFFue but should work fine in later versions too. For more info. please see the "Read Me" file included with the FM package. This will most likely be the last of the FM update packs for WOFFue, for those interested - WOFFue is a finely polished product that doesn't require much tweaking, while FE2/SF2 still require my attention.

NOTE: I didn't notice the AI doing extreme dives while testing the FMs so I've erred in favor of being consistent (increasing max dive speeds and G limits slightly where necessary to make player-flown aircraft more competitive with the AI). Wasn't able to find any way of implementing calls in the xfm files to limit dive speeds for the AI. Also, some of our good skinners in WOFFue or OBD themselves might be interested in doing a skin with the spinner removed on the Alb. D.III (to fit well with the Oeffag variant), and another skin that gives rounded wingtips on the SPAD 13 (for the early 200hp variant). 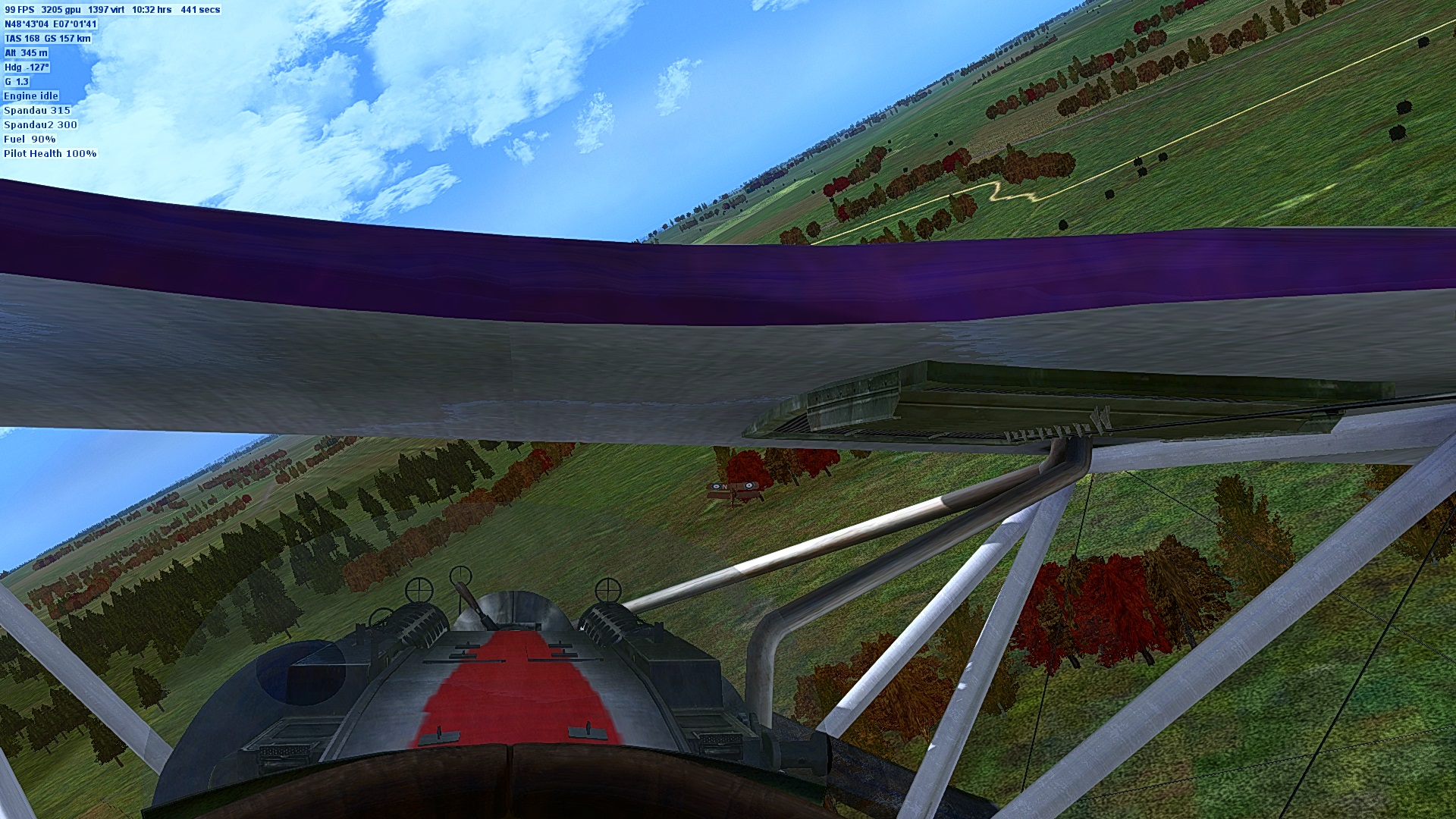 Thanks for your work, VonS. I'll be giving this one a try for sure.
Posted By: DukeIronHand

And thanks from me too!
S!
Posted By: VonS

Thanks gents' for the comments - much appreciated. Although ver. 4.0 will probably be the last big FM update for WOFFue that I've done/will do - I might comb over the parasol types sometime in the future and roll out a ver. 5.0 if there should be any interest in that. Will in the meantime do some reading into parasol flight characteristics.