It has been awhile since I have posted at Sim Hq...I am.a long time flight sim flyer including the Red Baron, BOB, OFF and ROF. I have been working on an art project that is intended as an immersive way to commemorate the Centennial of WW1 and thought you might be interested in this project. My involvement in flight sims is part of what led to taking on this project in the first place.

"Rupp's Skizzenbuch" is a simulation of a World War I soldier's journal and is a work of fiction. Rupp is a German Unteroffizier in Jasta 77 stationed not far from Cambrai. His character and the story is based on the novel "The Blue Max" written by Jack D. Hunter in 1964. Primary sources including photos, postcards and news headlines are interspersed in the fictional work to tie the story to real-world events during the Great War.

Here are the first three Chapters

CHAPTER ONE - INTRODUCTIONS
http://www.thebluemaxproject.org/ch1-introductions/
Unteroffizier Rupp Gerhardt introduces himself and explains what brought this “old campaigner” to the town of Beauvin and what services he provides to his squadmates at Jasta 77.

CHAPTER TWO – THE GREAT WAR
http://www.thebluemaxproject.org/ch2-the-great-war/
Rupp shares a map he drew to show where Jasta 77 is located on the Western Front. He intercepts an American paper and gets some insight into how the other side thinks the war is going.

CHAPTER THREE - THE VILLAGE
http://www.thebluemaxproject.org/ch3-the-village/
Rupp’s squad mate takes him for a wild ride in a DFW and ruins his aerial photo shoot of the Aerodrome requested by the Hauptmann. Angry with all of them he settles into some late night sketching and describes the Aerodrome, the village of Beauvin and his lucrative side businesses.

Rupp’s goal was to survive the war, not to win it and he was willing to do just about anything to make sure he survived. In this chapter, he shares his insights into the strengths and weaknesses of his fellow squad mates and explains how he uses that information to his best advantage.

Bruno Stachel arrives at Jasta 77 and meets Rupp for the first time. Their not so friendly introduction is interrupted by an attack on the base by a group of Sopwith Camels.

Leutnant Bruno Stachel has an immediate impact on Jasta 77 and not in a good way. Hauptmann Heidemann is trying to get to know his newest pilot and Rupp is sure he will either be the next Ace in the squad or dead within three weeks. It could go either way.

Leutnant Stachel, frustrated by his unconfirmed kill a few weeks earlier, makes a point when he drops an RE-8 right on the Hauptmann’s front porch. Bold, skilled and cruel, Stachel’s begins to make a reputation for himself.

The Big Push begins and Jasta 77 is in the thick of the fight. German pilots like their chances of winning, especially when they hear the new Fokker DVII’s will be delivered soon. Rupp can’t figure out why the Hauptmann is giving Stachel special treatment, but he knows he better figure it out soon.

It has been quite a week for Bruno Stachel. He shot down two more enemy aircraft, had a job offer from the Red Baron and got a nice write up in the Berlin papers. Hauptmann Heidemann seems to be putting Stachel on the fast track.
The next chapter will be April 27th.

CHAPTER ELEVEN – A DEAL WITH THE DEVIL
http://www.thebluemaxproject.org/ch11-a-deal-with-the-devil/

The Big Push starts to fizzle out. Von Richthofen is shot down over the Somme Valley. The only good news is the arrival of the first Fokker DVII for test flying. The aggressiveness of this machine is a perfect match for young Stachel, but he is counting heads to decide if he will be assigned one when the rest arrive later in the week. Rupp enters into a business arraignment to satisfy Stachel’s drinking habit, but he is having second thoughts.

CHAPTER TWELVE – WILI’S LAST SORTIE
http://www.thebluemaxproject.org/ch12-willis-last-sortie/
Rupp gets sent in to clean up another crash site, but this time the tragic death is close to home. Wili Klugermann and Bruno Stachel return from a successful sortie in a heavy mist. Stachel gets credited with three more kills, but Wili ends up wrapped around a factory chimney on the edge of town. Just one of those fluke accidents…..or was it?

CHAPTER THIRTEEN – HEIDEMANN MAKES A HERO
http://www.thebluemaxproject.org/ch13-heidemann-makes-a-hero/
Stachel’s drinking gets worse, but the kills keep piling up. With the Hauptmann’s support, he demands that his Fokker be painted all black and asks for a unique slogan to be painted in English on the upper wing. Realizing what a good customer Stachel has become, Rupp raises his price. Amid all that Stachel surprises everyone when he risks his life to save a French school girl who falls into an icy stream. Angel or Devil? A little of one, a lot of the other.

CHAPTER FOURTEEN – THE BOTTLE AND THE BLUE MAX
http://www.thebluemaxproject.org/ch14-the-bottle-and-the-blue-max

Stachel finally achieves his goal of being awarded the Blue Max. While Stachel’s achievements in the air are extraordinary, on the ground his drinking begins to take a toll. Heidemann’s publicity campaign goes into full swing and Stachel is overwhelmed by all the attention.

Heidemann continues his campaign to make Stachel famous and sends the Black Angel on tour. Stachel fits in a stop at Sonnenstrahl to visit with the Gräfin and attempts to blackmail her over Wili’s journal. Things do not go well and Kaeti reaches out to Rupp for protection. Rupp has just what Kaeti needs.

CHAPTER SIXTEEN – THE BIG PUSH GETS PUSHED BACK
http://www.thebluemaxproject.org/ch16-the-big-push-gets-pushed-back/

The tide begins to turn against Germany in the Great War and Jasta 77 is forced to relocate to Coucy. A shortage of replacement parts and fuel is making it a struggle to keep aircraft in the air. The Fokker DVII is plagued by engine problems and Leutnant Stachel has a very close call.

Rupp gets sent to the front lines at Bellicourt and discovers what life is like in the underground tunnels of the St. Quentin Canal. Kettering has taken over Rupp’s mail delivery service and sends a messenger to him with an apology, a box of cigars and an update on the continuing adventures of Hauptmann Heidemann and Leutnant Stachel.

A tragic accident, an unwanted promotion, a forced marriage. Poor Bruno….even when he does the right thing he can’t seem to catch a break. Meanwhile, Kaeti sends Rupp a letter with a large cash payment to settle her debt with him. Rupp needs one more lucky break to put his “exit plan” in place. He hopes that break comes soon, he is not sure how much longer he will last in the Tunnels of Bellicourt.

CHAPTER TWENTY – The Yanks and the Lucky Break
http://www.thebluemaxproject.org/ch20-the-yanks-and-the-lucky-break/

The Americans start making their presence felt on the Western Front and things are heating up at Bellicourt. Rupp’s Hauptmann sends him into harm’s way to photograph a crash site. Rupp is angry about having to put his life at risk on a whim, but the Breguet provides just the lucky break he was looking for.

CHAPTER TWENTY ONE – Leap of Faith
http://www.thebluemaxproject.org/ch21-leap-of-faith/
The Battle of the St Quentin Canal begins and the inexperienced Americans manage to push the Germans back with a lot of help from the more seasoned Australians. Rupp takes advantage of the chaos while retreating through Nauroy and hides away in the belfry of an old church. A giant leap and a bad landing send his “ best made plans” into a tailspin.

Rupp manages to continue his ruse while he recovers from injuries at the American Hospital in Étretat. There are rumors all around that Germany is ready to surrender. The Americans are in a mood to celebrate, but Rupp only becomes more withdrawn. All the lying and the sleepless nights are taking a toll on him. He needs to find a way out before his luck runs out.

The train breaks down half way to St. Nazaire. Locals invite injured soldiers into their homes overnight while the locomotive is being repaired. Rupp spends a quiet night in a peaceful villa with a house cat and a view of the vineyard. It’s the first time in weeks that he has had time to think in a restful place. He comes to realize that he needs to adjust his plans one more time.

On the Centennial of Armistice Day the Smithsonian confirms the authenticity of Rupp’s sketchbook and informs the family. In St. Augustine ( Jack Hunter’s hometown) the Historical Society underlines this discovery as providing unique insight into the experiences of one German soldier who survived the Great War.

Rupp’s final sketch is discovered in the last sleeve of the journal and it documents both the end of his wartime experience and the beginning of his long road back to home, health and recovery. 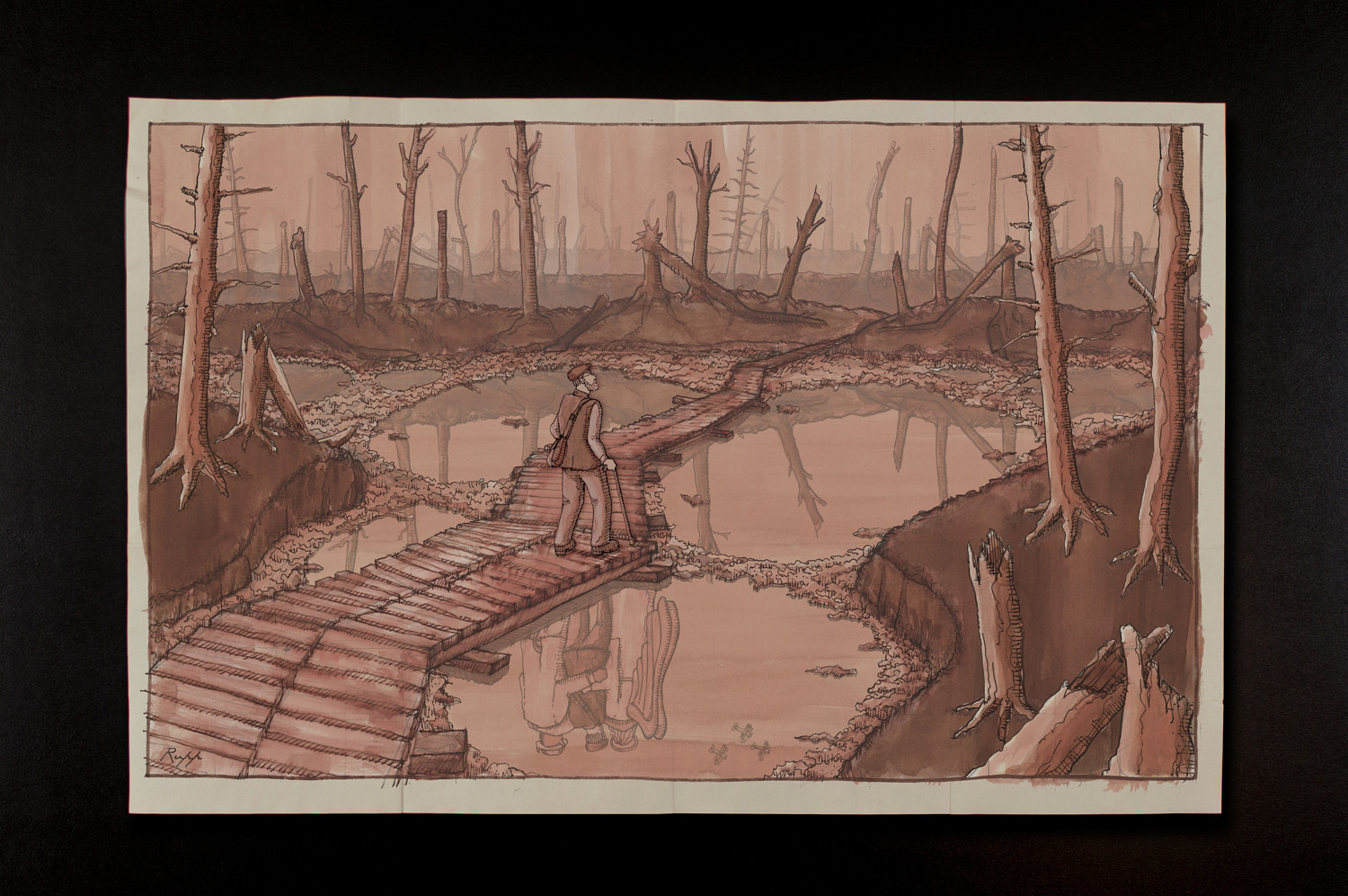 bumping the post, added a chapter
Posted By: Dart

Neat. I'll check them out later!
Posted By: WWGeezer

I know there is not a lot of chat in this thread, but I am reading and enjoying "Rupps Skizzenbuch"
Thanks for sharing Geezer. I'm enjoying it and great illustrations too
Posted By: WWGeezer

Thanks Steve....not sure how I fell down this rabbit hole but it has been a wonderful journey. What's crazy is I am working on the last eight chapters now, and these first couple were done in early 2016. The content gets better over time as I was learning how to do this. Not worried about chat, just looking for readers who have a passion about WW1 aviation history and story telling , so I appreciate your post.
Posted By: Brigstock

It's a great concept, made richer with illustration.
I'm enjoying it, looking forward to Chapter 6.

New Chapter up.
Posted By: WWGeezer

New Chapter Up
Posted By: WWGeezer

New Chapter Up!
Posted By: WWGeezer

Next Chapter Up!
Posted By: ArgonV

These are great!
Posted By: wheelsup_cavu

Enjoying them quite a bit. Any reason you skipped "Ch3 The Village" in your first post?

Wheels
(Incidentally you skipped Chapter 10 in the first post.)
Posted By: WWGeezer

Next chapter up.
Posted By: WWGeezer

New Chapter Up
Posted By: WWGeezer

Next Chapter Up
Posted By: WWGeezer

Next Chapter Up!
Posted By: WWGeezer

New Chapter up!
Posted By: WWGeezer

New Chapter Up!
Posted By: wheelsup_cavu

Somehow my notifications for this thread got turned off...
Was enjoying the series so I am going to go back and catch up.

No worries, Wheels, we are on the homeward stretch now! Only four chapters left after this week.
Posted By: WWGeezer

Next Chapter Up!
Posted By: wheelsup_cavu

New Chapter Up...check out the cool map!
Posted By: WWGeezer

That's all folks....thanks for letting me share this with you over the last year.
Posted By: wheelsup_cavu

Enjoyed the time spent reading his adventures.
The story was so engrossing you almost fooled me with the epilogue.
Thanks

Thank you, really enjoyed it, nice work!
Posted By: wheelsup_cavu

Shame this is not online anymore. It was a really well done series.